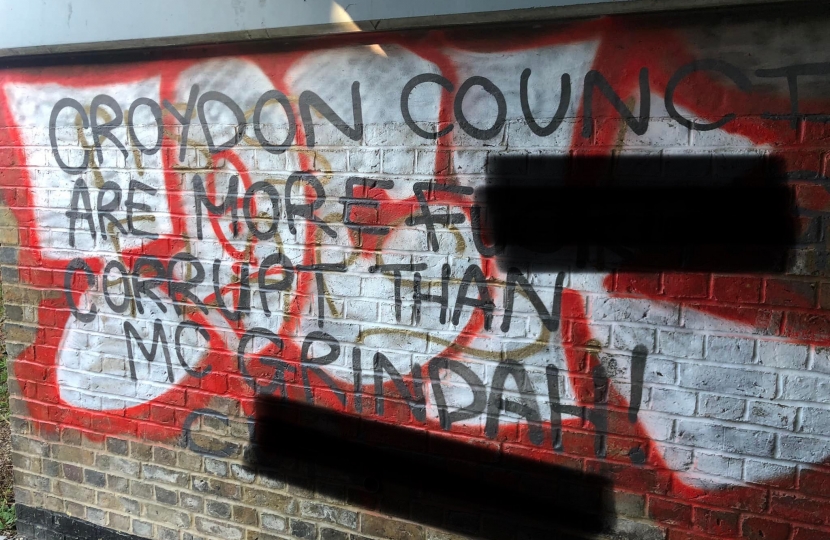 Last night, Croydon's failing Labour Council voted against restoring the Graffiti Team. Since the team was sacked (due to the Labour Bankruptcy, of course), many residents have grown angry at the decay of Croydon's High Streets - with graffiti alongside fly-tipping, litter and long grass making our borough an ever-more unpleasant place. The graffiti pictured above featured some extremely offensive language. Yet Croydon Council took months to remove it, despite schoolchildren having to walk past it nearly every day.

Our motion, introduced by Mayoral Candidate Jason Perry and seconded by Scott Roche, Shadow Cabinet Member for the Environment, called on the Labour Council to restore the Graffiti Team as a vital first step to making people proud of their town again.

As a result of their choices, running debt upto £1.6 billion, buying hotels and shopping centres, lending £200m to BxB, unlawfully contracting out the botched refurbishment of Fairfield Halls, our borough is now bankrupt and services have been slashed in a vain effort to balance the books.

And it is our residents that are paying the price – literally through their increased Council Tax but also in their everyday lives. One of the biggest blights in our borough right now is the rapid increase in fly tipping and graffiti.

One of Labour’s measly cuts was to disband the graffiti removal team that provided such a fantastic service. This was such a short-sighted cut as we can now see the graffiti spreading uncontrollably. Even if its offensive it takes weeks to remove.

Well, to our residents and businesses it’s all offensive. It gives the impression of a town in decline. It shows a borough where the Council does not listen and does not care. This fly tipping and this graffiti deters inward investment into the borough - why would a business choose to invest in a borough that is so run down? It is vital that we clear the rubbish and clean the graffiti, it is the often-said broken window effect. Graffiti encourages more graffiti; it needs to be removed as quickly as possible.

Many of the cuts put forward by this council have been petty but the consequences have been dramatic, risking inward investment into our borough and destabilising our local economy.

That is why our Graffiti Team is so important, and why it is so disappointing that the Failing Labour Council chose not to restore it last night.

Croydon is a fantastic borough - and it's the place I've lived in all my life. I'm humbled and proud to be the Conservative Candidate for Mayor of Croydon in 2022. The Labour Council is not listening to Croydon, but I want to change that. I want to listen to you as I create my plan for Croydon.

Croydon Labour’s financial mismanagement has required the Council to issue a new Section 114 notice.
Official reports detail “mistakes” made in the previous Administration’s budgets – which Labour claimed were “balanced” – worth tens of millions of pounds.